This example of the Scale-Craft NYC J-1-D sports the cast-bronze oiler for which this model is widely known. 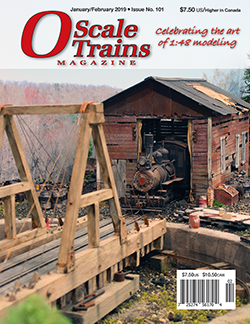 Scale-Craft was one of the big names in pre-war O scale. Scale-Craft offered a broad and very popular line of models, including locomotives, freight cars, and passenger cars. By all signs Scale-Craft was a well-run company. They made quality models and managed not just to survive, but to continuously expand their product line from inception to the start of World War II. Scale-Craft perfectly targeted the middle spectrum of the hobby – the modeler with some money, some time, and some skill (specifically, a skill level commensurate with an era in which shop was still an important part of the high school curriculum). Among the other big names, Lobaugh, Icken, Alexander, and Scale Model Railways tended to cater more to the upper crust. Walthers was probably the closest to Scale-Craft in terms of market approach and cost point, but their kits tended to have more parts, and to take more time and skill to build.

One surprisingly consistent aspect of Scale-Craft models was that they were well-engineered. The company focused on mass production of affordable and buildable kits that produced solid, good looking, and good running models. Except for the early years, Scale-Craft did not offer factory-build services, and as best I can tell never offered custom model services. As testament to how well Scale-Craft models were engineered, it is not at all uncommon to find unrestored but perfectly serviceable Scale-Craft locomotives and cars on the used market today. 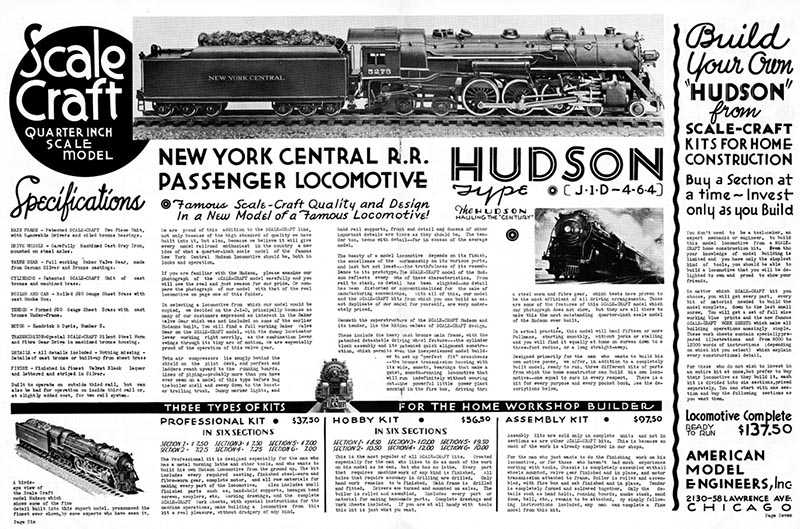 The ME Scale-Craft NYC J-1-D was announced with a two-page spread in a 1934 flyer. The model was originally equipped with a built-up brass boiler.

The name most associated with Scale-Craft is Elliott Donnelly. An article on the Donnelly years at Scale-Craft is found in the January/February 2014 issue of O Scale Resource, Vol. 1, No. 3. The article is focused more on Elliott Donnelly than on the actual models produced by Scale-Craft. There is no doubt that Donnelly was central to the success of Scale-Craft. He was the scion of a wealthy publishing family and it would seem he brought capital, business savvy, professional marketing, and public relations to the company. Having said that, I tend to be model centric in my view of the hobby, and I will argue here that most of the credit for Scale-Craft’s success in designing, engineering, and producing great models belongs with an-other man and another company. The man was C. H. Smith and the company was American Model Engineers.

An example of the PFE reefer is shown in Figure 9. The Western Pacific herald is a decal, clearly added later, and almost certainly covering the original hand-painted Union Pacific and Southern Pacific heralds.

First, let me provide a little background on the name Scale-Craft. Most modelers use this term to refer to a company, but more accurately Scale-Craft was the name of a product line of model railroad equipment. This product line name was first used by American Model Engineers (AME) which was in business from 1933 to 1936. A clip from a 1934 AME catalog is shown in Figure 1. The product line was sold to Elliott Donnelly and his company Scale Models, Inc. in 1936 as announced in Model Railroader in its June issue of that year. Donnelly continued to market these models as Scale-Craft, though for some unknown reason the name Scale Models, Inc. appears on the die-cast couplers that came with Scale-Craft cars at the time.

At some point during 1940-1941, and apparently with little or no fanfare, the name of the company changed from Scale Models, Inc. to Scale-Craft & Co. This name continued through and after the war. In 1951, the O scale line was sold to Thomas Industries of Shawnee, Oklahoma, and Scale-Craft & Co. focused (to their end) on OO scale. Thomas marketed the O scale cars under their own name, but the instruction sheets kept the name Scale-Craft in the title block. A page on the TCA website states that Thomas kept the freight car line alive until 1960. That is about right, as the Thomas (Scale-Craft) boxcar, reefer, stock car, hopper, and gondola appear in the 1956-57 Boxcar Ken catalog, but are gone by the 1962-63 catalog.

Instructions for the Scale-Craft tank car have the American Model Engineers title block and a March 1936 release date – strong evidence that this model was developed by AME.

Clifford H. Smith is as central to American Model Engineers (and the Scale-Craft line in its time) as Elliot Donnelly was to Scale Models, Inc. As with Donnelly, C.H. Smith was from a well-to-do family, which likely was an advantage in the securement of capital needed to start and grow the business. Additionally, both men during their tenure wrote much of the promotional material in the first person and seemed comfortable as the company spokesmen – Smith maybe even more than Donnelly in this regard, as Smith’s photo regularly appears in the catalogs while Donnelly’s does not.

Even with marketing and publishing, which Donnelly came by naturally given his family background, Smith was no slouch. AME printed a large number of different flyers and catalogs, and the layout and quality of these is quite good. An example is shown in Figure 5. It should be noted that AME printed material is not often seen for sale on eBay or at shows. The same can be said for their models. The hobby was clearly still just getting started, hampered as it was by the Great Depression. 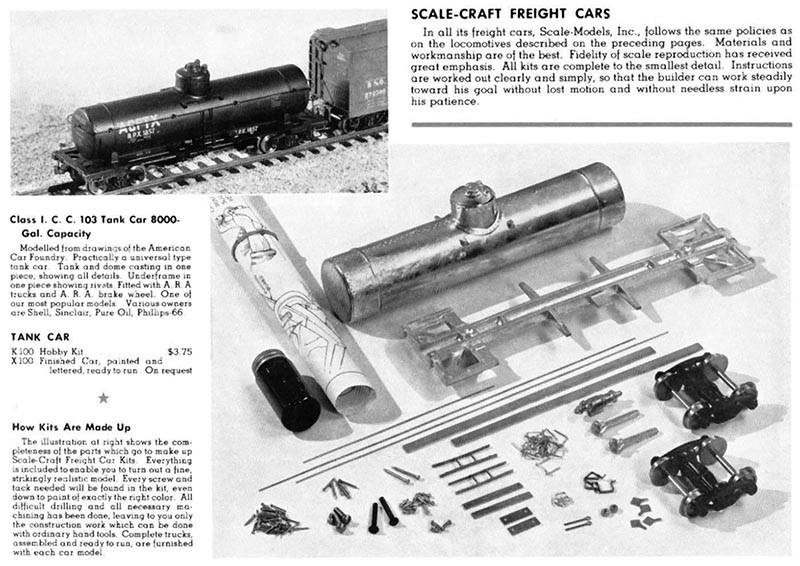 Scale-Craft tank car as introduced in the 1936 catalog, the first after the sale to Scale Models, Inc.

As will be seen, all the basic foundations of the Scale-Craft line were developed by Smith and his staff at AME. I do not have a perfectly clear picture of the model history at AME, but here is the story as best I can glean it from the documentation I have available. Having started sometime in 1933, it appears that AME entered 1934 with one locomotive and one freight car: the Pennsylvania K-4 Pacific and X-29 boxcar.

One piece of evidence for this is an undated flyer in which these two models are the only models that appear. Another is a 1934 catalog (there were two that year) that only has the K4, the X-29, and a 12-1 Pullman of built-up construction. Additionally, the K-4 and X-29 are the only two models that appear in all six of the catalogs and flyers I have in hand. AME did their homework on these two models, as they were well received, appeared to sell well, and were clearly the early flagships of the Scale-Craft product line…

Read the rest of this article in the January/February 2019 issue of O Scale Trains! Subscribe Today!