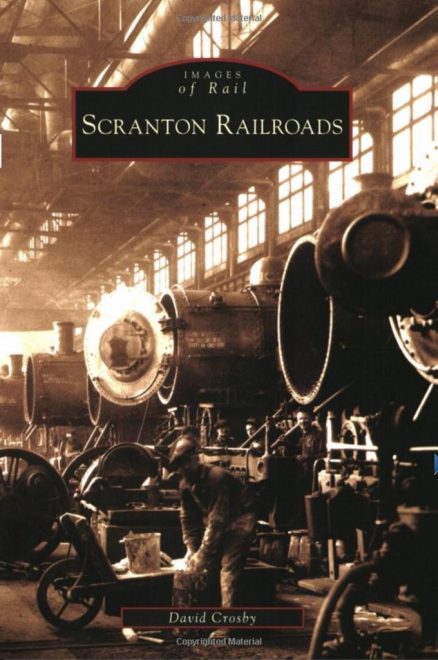 I’ve have enjoyed hours of pleasures since I discovered David Crosby’s recently published Scranton Railroads, the latest volume in Arcadia Publishing’s Images of Rail series. Scranton Railroads could be twice the price, and it would still be a remarkable value for modelers interested in the how’s and why’s of heavy-duty railroading in an industrialized, urban environment in Pennsylvania’s Anthracite coal fields.

I find Arcadia’s recent emphasis on coverage of smaller (by New York City and Chicago standards) cities to be a very welcome change of pace. The world may not need another book on railroading in Chicago, but railroading in “gritty” cities like Scranton has opened me up to new modeling frontiers.

The pleasure begins on the cover, which contains a duotone of a 1922 “industrial architecture” shot of a worker looking into the camera, framed by a half-dozen variously-opened smoke box doors on the floor of the Delaware, Lackawanna, & Western’s erecting shops. . It’s one of the best “man and machine” photographs I’ve ever seen, and it’s also a fresh pleasure–I haven’t seen it used elsewhere. (The photograph is part of the collection of the Railroad Museum of Pennsylvania, Pennsylvania Historical and Museum Comission.) It’s one of the few photographs that communicates the scale of a steam engine erecting shop during the period when steam ruled.

If there’s a one-word “theme” that could be used to describe Scranton Railroads, the keyword would be “infrastructure.”

Scranton Railroads does an excellent job of describing the facilities used by the city’s original lines, and how they were often rebuilt, and re-rebuilt, to higher and higher standards. The result was a city that didn’t have to apologize to many larger cities for the intensity of it’s railroad’s physical plant and operating complexity.

Forced to highlight one chapter in terms of exceptional image, my choice would be Chapter 4: A Massive Infrastructure. Chapter 4 contains numerous photographs documenting the construction of the Delaware, Lackawanna, and Western’s World War l era passenger station on a grade-separated right of way.

Chapter 4 clarified many details I had previously not known about. For example, the stations complex leads and interlocking were built on a bridge over the Lackawanna River. It was the third bridge at the location, the railroad having quickly outgrown the first two.

Chapter 4 balances coverage of the dominant Delaware, Lackawanna & Western with coverage of the facilities and shops used by Scranton’s other railroads: such as the Delaware & Hudson; the New York, Ontario & Western; and the Erie.

I was especially pleased by the coverage of the terminal of the electrified Lackawanna & Wyoming Valley interurban adjacent to the Lackawanna’s station. The photos clarified the relationships of the two terminals, making it possible to create an even more realistic module of the line’s terminal.

In addition to providing a look at the interior of the coal mines that drove the city’s economy, Scranton’s railroads fielded numerous interesting rolling stock entries, such as fire-free pneumatic steam locomotives, numerous strange shop and industrial designs, and numerous camelback designs.

I was also intrigued by the description of the role that YMCA’s provided railroaders; quality, affordable food, lodging, and medical care across the street from the main passenger station.

Finally, on page 51, there’s a single, large photograph of Hunt & Connell’s Storage Warehouse, which just cries out to be modeled as a “foreground” model. A visual treat that represents Scranton’s heritage during the glory days. Overall, Scranton Railroads is a great book packing in a lot of information for a small price.